Cancer Diagnosis and Mental Health: What’s an Oncology Navigator to Do?

Having cancer significantly increases a person’s risk for depression and anxiety. Unfortunately, treating depression in patients with cancer does not affect their survival, but the combination of cancer and depression does worsen cancer prognosis, so it is crucial to treat these patients appropriately, according to Kevin Scott Ferentz, MD, chairman of the Department of Family Medicine at Greater Baltimore Medical Center.

“Many depressed patients with cancer do not receive effective treatment,” he said at the AONN+ 11th Annual Navigation & Survivorship Conference. “But, unfortunately, that applies to all people with depression, whether they have cancer or not.”

In 2017, an estimated 17 million people in the United States had at least 1 depressive episode, occurring slightly more often in women than in men. That’s 7% of all adults. The lifetime prevalence of depression, or the likelihood of having an episode of depression at some point in one’s life, is almost 1 in 5 in the United States. Anxiety is even more common: 40 million people—or 18% of the US population—have an anxiety disorder.

Approximately 20% of patients with cancer will develop depression, and about 10% will have an anxiety disorder. But two-thirds of patients with depression also have significant anxiety symptoms. “The incidence of depression varies by cancer type, and in pancreatic cancer, about 70% of people are going to get depressed,” he noted. “And interestingly, it arises months before the diagnosis.”

In lung cancer the incidence of depression is about 13%; in gynecologic cancer, 11%; in breast cancer, about 9%; in colorectal cancer, 7%; and in genitourinary cancer, about 6%. This difference in incidence across malignancies may relate to prognosis, pain, or body image disruption.

Only about 1 in 5 people with depression in the United States is adequately treated. “That’s not good, and unfortunately, poor recognition of depression and anxiety is associated with a reduced quality of life and even reduced survival [in patients with cancer],” he added.

When Does Depression Present in Patients with Cancer?

Depression can present at diagnosis, during the acute treatment phase (highest prevalence), at discharge (as this can represent a sudden cessation of regular support), at the end of life, and even into survivorship due to fears of recurrence.

A meta-analysis of 76 prospective studies showed that a depression diagnosis and high levels of depressive symptoms in patients with cancer increased mortality. “That’s true whether or not the patient was depressed before or after their cancer diagnosis, and that association persisted after controlling for all kinds of confounding medical variables,” he noted. “So it’s very important that you screen for and treat depression in patients with cancer, because if you don’t, the person is actually more likely to die.”

According to Dr Ferentz, referrals to mental health specialists should be considered when necessary, or refer back to the patient’s primary care doctor if he or she feels comfortable managing the person’s depression or anxiety.

“The literature in this area really sucks,” he added. “We need a lot more research on figuring out whether the treatment of depression—besides making the person feel better and enhancing their quality of life—could extend the survival of depressed patients with cancer.”

Biology of Depression in Cancer

Although the prevalence of depression in patients with cancer exceeds that in the general population, this is not solely explained by psychosocial stressors (stressful events within 6 months of depression). This higher incidence is also due to proinflammatory cytokines (biomarkers of inflammation in patients with cancer) and certain cancer treatments, such as chemotherapy and corticosteroids. Some cancers can also release chemicals thought to cause depression (eg, elevated cytokine interleukin-6 in pancreatic cancer, paraneoplastic syndromes in lung cancer). Chronic inflammatory processes may also underlie depression symptoms, and therapeutic modalities used in the treatment of cancer can cause inflammatory reactions.

Add to this the psychological reactions to diagnosis, treatment, relapse, end-of-life care, and survivorship, as well as the many side effects that patients experience, including vomiting, hair loss, sexual dysfunction, mucositis and peripheral neuropathies, expectations regarding survival, and the numerous effects on work and social roles, and it becomes clear why people with cancer are more likely to get depressed.

According to Dr Ferentz, every patient should be screened for depression through the Patient Health Questionnaire-9 (PHQ-9). “Not only do you make a diagnosis of depression with this, you can actually see how depressed the person is,” he noted. Similarly, the General Anxiety Disorder-7 questionnaire should be used to assess symptoms of anxiety and inform a course of treatment if necessary.

Patients with cancer in the United States have nearly twice the incidence of suicide of the general population, and suicide rates vary according to the type of malignancy, with those having cancers of the lung, head and neck, testes, bladder, and Hodgkin’s lymphoma at highest risk of suicide.

“It’s very important that if you see a depressed person, you ask about suicide,” he said. “Most will talk frankly if asked if they have thoughts of hurting or killing themselves.” If the answer is yes, ask: Are there means (eg, gun, poison)? Have you rehearsed? How strong is your intent? Can you resist the impulse? If a person is deemed to be actively suicidal, someone should stay with that person until a psychiatrist with admitting privileges can intervene, he advised. If the patient refuses, the police will bring them to an emergency department.

If the risk of suicide is not imminent, increase contact with the patient (calls, visits), treat the depression with medication, and keep in mind that benzodiazepines are helpful for this type of patient.

Dr Ferentz noted that psychotherapy is not a replacement for medication in depressed patients. “Psychotherapy is an adjunct to drugs,” he said. “Some need therapy, but almost all of them—unless they’re mildly depressed—need drugs. And the more depressed you are, the more you need both.”

According to Dr Ferentz, all antidepressants are equally effective, assuming reasonable dosing. Before choosing a new antidepressant, consider prior antidepressant treatment, including those used by family members.

In the largest meta-analysis of antidepressants to date, including nearly 26,000 participants, mirtazapine, escitalopram, venlafaxine, and sertraline were significantly more efficacious than duloxetine, fluoxetine, and paroxetine. Escitalopram and sertraline showed the best acceptability, and patients on these drugs had fewer discontinuations than those on duloxetine, paroxetine, and venlafaxine. Based on these data, and considering benefits, acceptability, and cost, sertraline (Zoloft) might be the best choice.

“So if you don’t have a reason to pick another drug (ie, everyone in my family has done well on Prozac), think about sertraline,” he said.

However, not everyone gets better on an antidepressant, even at maximal dosage. In these cases, a second medication may need to be added. “By far, the most common drug that we use to augment is bupropion (Wellbutrin),” he said. Other options include buspirone, mirtazapine, topiramate, aripiprazole/brexpiprazole, and folic acid.

Unfortunately, antidepressants can worsen existing cancer symptoms and interact with chemotherapy agents, but sertraline and citalopram tend to have the least interactions and are generally well tolerated as first-line agents.

Related Articles
AONN+ Annual Conference Monograph: A Study of Key Sessions
Meg Barbor, MPH
|
May 2021 Vol 12, No 5
At the recent AONN+ Annual Conference, experts in oncology navigation convened virtually with conference attendees to offer their insights in furthering the efficacy of navigation. This monograph will review the proceedings from 4 key sessions covering the timely topics of telehealth, mental health and the oncology patient, prehabilitation and rehabilitation, and value-based oncology care.
Cancer and Mental Health: Lightening the Load for Patients
October 2020 Vol 11, No 10
Learn how to assess and recognize distress in your patients – and what you can do about it.
Fighting the Stigma: Treating Mentally Ill Patients with Cancer
September 2019 Vol 10, No 9
What you need to know about navigating a patient with mental health issues.
Last modified: November 15, 2022 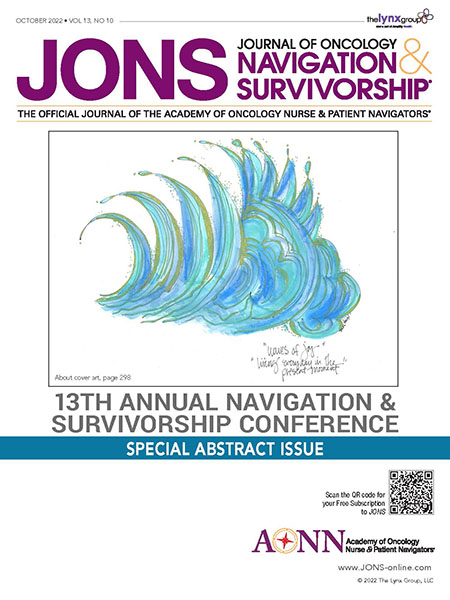