NACR has employed Native patient navigators (NPNs), or “Native Sisters,” since 1994 and established the first American Indian program on patient navigation. The program partners Native American patients with Native American navigators who understand the numerous cultural barriers in the community and work to incorporate patients’ customs and beliefs into the cancer care continuum. “We’re not stupid, we’re different. And we like to cherish the differences,” she said.

Dr Burhansstipanov emphasized the importance of coordination between NPNs and nurse navigators. “Our navigators have worked beautifully with nurse navigators,” she said at the Academy of Oncology Nurse & Patient Navigators 7th Annual Navigation & Survivorship Conference. “Spirituality is very different in Indian country, and it’s embedded in everything we do. When we have cultural issues in the clinical setting, the nurse navigators have been the ones who help our Native Sisters carry out their role.”

For example, an owl icon was used in one of their Colorado hospitals to lead patients toward the site of their treatment, but the owl is a symbol for death in many tribes, so the nurse navigators agreed to help the NPNs lead Native American patients to treatment via a different route. Or in the case of a Native American man from a Northeastern tribe just diagnosed with prostate cancer—if someone came up behind him and touched his back to comfort him, inadvertently touching his braids, he would have to go through a time-consuming ceremony. “Some things you just don’t know unless you have someone to help you,” she said.

Some ceremonies require rendering of flesh, but for a breast cancer patient, this would make her susceptible to infection. The Native navigator works with the traditional healer and explains the situation (ie, she can’t drink the water from the ceremony and must have bottled water). So navigators play an important role not only in guiding patients through treatment in the Western medicine setting, but also in traditional Native medicine.

Their website (http://natamcancer.org) features various resources for both Native patients and navigators. It includes cancer and survivorship information, fact sheets, tips on keeping tobacco sacred, and how to differentiate commercial from ceremonial tobacco, interactive tools for identifying cancer risk factors, and educational videos. They also offer a Native Sisters help line, hosted by volunteers. Since different tribes have different beliefs, she stressed the importance of partnering with larger organizations like Spirit of Eagles or the South East American Indian Council. “There are protocols and subtleties that come with each of the cultures, and a Native navigator can help with that,” she said.

Navigator programs improve patients’ access to timely and better services. Among Native American women with breast cancer, the average time from biopsy to initiation of treatment is 6 months. But when NPNs are in the picture, time to initiation of care is typically less than 2 months, Dr Burhansstipanov reported. “We have to be realistic,” she said. “We’re a small community, and you’re not going to hire a Native Sister to work in your program. But you can subcontract to organizations like ours, so that when you have a Native patient we’re there to help. That’s what we’re trying to do.”

NACR prefers to hire Native navigators, but they also employ non-natives who are well accepted in the community. Navigators must have credibility and be respected in the community, she stressed, and they have a variety of ways to assess how well the community likes them. “But passion for the people is what makes the best patient navigator,” she said.

Related Articles
Tales from a Navigator: “Can You Navigate Our Horses Out of the Parking Lot?”
September 2021 Vol 12, No 9
On a daily basis, navigators are asked to provide many varied, and sometimes very novel, services for their patients, according to Penny Daugherty, RN, MS, OCN, ONN-CG, an oncology nurse navigator at the Northside Hospital Cancer Institute in Atlanta.
AONN+ Annual Conference Monograph: A Study of Key Sessions
Meg Barbor, MPH
|
May 2021 Vol 12, No 5
At the recent AONN+ Annual Conference, experts in oncology navigation convened virtually with conference attendees to offer their insights in furthering the efficacy of navigation. This monograph will review the proceedings from 4 key sessions covering the timely topics of telehealth, mental health and the oncology patient, prehabilitation and rehabilitation, and value-based oncology care.
Developing and Sustaining Patient Navigation Programs in Low- and Middle-Income Countries
April 2021 Vol 12, No 4
The American Cancer Society aims to implement navigation programs abroad through the BEACON Initiative.
Last modified: April 23, 2021 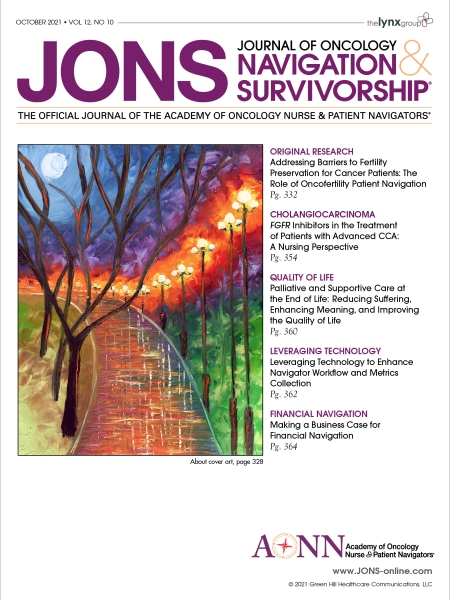