Background: Despite the evidence establishing screening as effective in decreasing cancer mortality, rates remain below recommended levels. Patient navigation (PN) has shown promise to increase screening, yet the strength of the evidence of PN on screening rates is unknown.

Objectives: To determine the effects of PN, including professional navigators (nurse and non-nurse) versus trained lay navigators, on all cancer screening behaviors.

Methods: Medical and social science databases were searched for randomized controlled trials published in English between 1989 and May 2015 for inclusion in a meta-analysis. The review process was guided by PRISMA. Data were extracted to assess the effect of navigation on cancer screening rates. Random effects models were used to compute risk ratios, and I2 statistics determined the impact of heterogeneity.

Discussion: The results suggest that PN is an effective intervention for increasing cancer screening, with greater effects achieved by professional navigators.

Conclusion: The evidence provided by this meta-analysis supports the implementation of nurse navigation programs to promote screening rates.

Cancer screening can significantly reduce mortality rates related to breast cancer,1,2 colorectal cancer,3 and cervical cancer4. Various cancer screening tools have been proved effective in detecting cancers, including mammography for breast cancer,5 pap tests for cervical cancer,6 and fecal occult blood testing, sigmoidoscopy, colonoscopy, and fecal immunochemical test for colorectal cancer,7,8 all of which are recommended by both the American9 and Canadian10 cancer societies. Due in large part to increases in cancer screening rates over the past 2 decades, rates of cancer mortality have been falling.11,12 However, despite this promising trend, cancer screening rates remain below the recommended levels,13 especially among ethnic minorities,13,14 those with low socioeconomic status,15-18 and the uninsured.17,19,20 Additionally, many patients experience a variety of barriers to cancer screening, including lack of awareness of the need for screening,18,21 lack of recommendation from a physician,21 language barriers, logistical challenges to attending screening sessions, cultural beliefs regarding cancer, negative views of cancer and cancer screening, and lack of motivation for screening.18

Patient navigation (PN) was introduced in the 1990s in Harlem, NY, as an intervention to address barriers to cancer care access.22,23 PN is defined as a one-on-one interaction between a navigator and a patient. The navigator, either a professional, such as a nurse, or a trained layperson, provides health education and support to a patient to promote recommended healthcare utilization behaviors from screening to diagnosis to resolution.24,25 Traditionally, PN intervention programs have trained and employed lay individuals as navigators who are representative of an affected community, who have experience with a particular disease/condition (eg, cancer), and who share a community of identity (eg, geography, race/ethnicity, culture, language, gender). Navigators have traditionally been non–health professionals, or peer helpers, using firsthand knowledge and experience with the healthcare system to benefit others.23 However, in the past 25 years since PN interventions were introduced into research and practice settings, the navigator role has expanded to include trained healthcare professionals, such as nurses,26 otherwise referred to as professional navigators.

Following the Preferred Reporting Items for Systematic Reviews and Meta-Analyses (PRISMA) statement and recommendations28 as a guide for the development and completion of this meta-analysis, we began with comprehensive literature searches of medical and social science databases including MEDLINE, PsycINFO, EBM Reviews – Cochrane Central Register of Controlled Trials, Healthstar, Joanna Briggs Institute EBP database, and Embase for research published between 1989 and May 2015. Citations from all databases (N = 3985) were reviewed, and duplicates (n = 2014) were removed in Covidence.org. Two authors (SAF, TC) independently reviewed the remaining abstracts (n = 1971) for eligibility. Discrepancies regarding the inclusion or exclusion of studies were resolved by a third author (LBS). Included studies had to be randomized controlled trials (RCTs) with a comparison group; use the term “navigation” in the description of the intervention (eg, navigator, navigate); test a PN intervention, measure the intervention components, and assess a health outcome; be published in a peer-reviewed journal; and be available in the English language. Papers were excluded if studies were quasi-experimental, qualitative, case studies, nonempirical, non–peer-reviewed, or testing technology applications; were meta-analyses, systematic reviews, comments, editorials, case series, notes, or conference proceedings. For the current analysis, only those studies assessing completion of a cancer screening behavior were included. Figure 1 presents the PRISMA flowchart outlining the process of article selection. 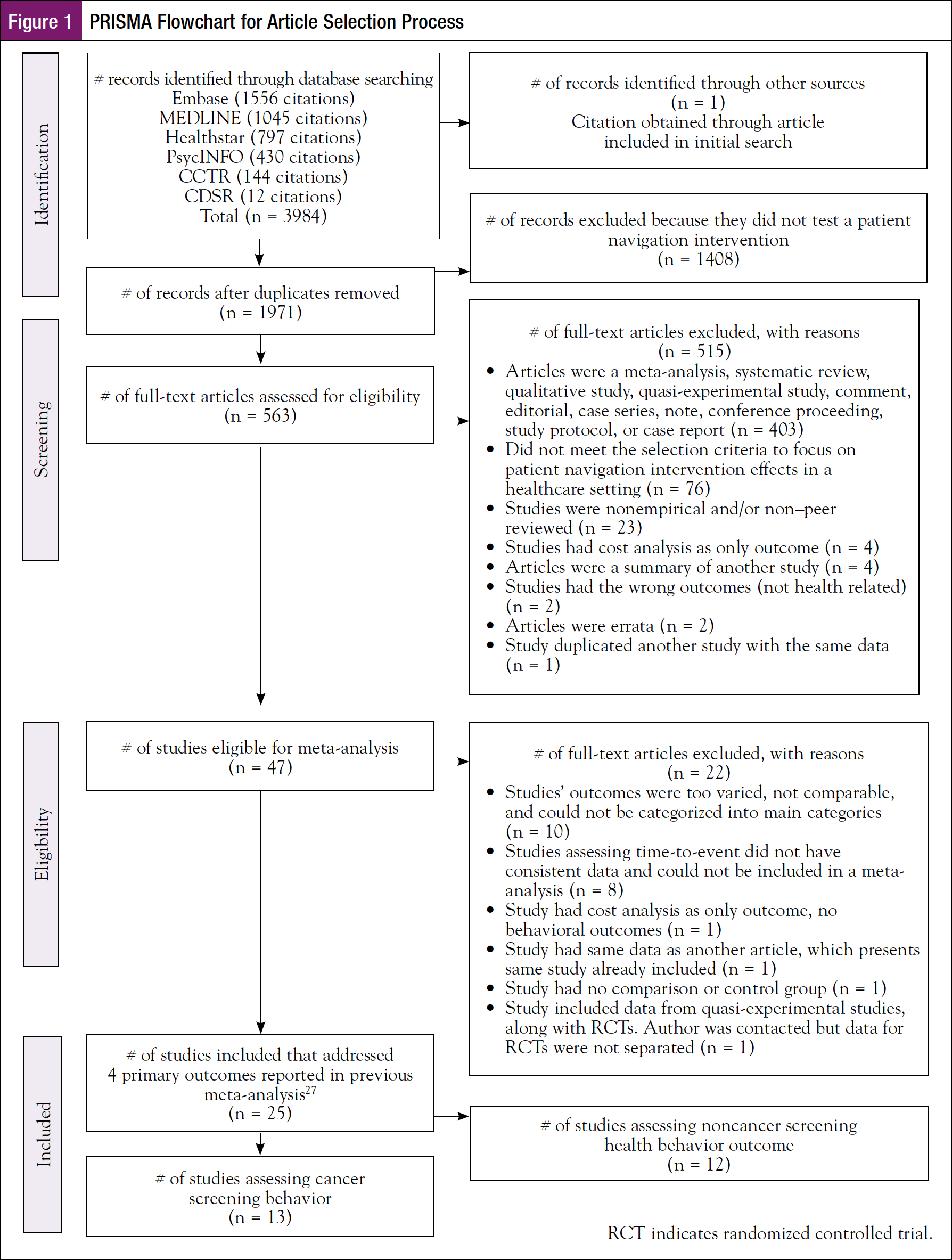 Two authors (SAF, NMJ) independently extracted data, including nature of navigation (lay vs professional) and results from the RCT, which were entered into an Excel database and subsequently verified for any discrepancies. Data analysis was completed using Review Manager 5.3.29 The random effects model was used to examine combined results due to the anticipated clinical heterogeneity in the methodology of studies. Dichotomous outcome measures for each RCT

were expressed as odds ratios (ORs) and 95% confidence intervals (CIs). To determine the impact of heterogeneity on the meta-analysis, I2 statistics were used. An I2 score of ≤40% was considered unimportant heterogeneity.30 For each study included in a model, the effect was plotted according to the inverse of its standard error. Egger’s regression intercept of funnel plot asymmetry was computed to test the presence of publication bias.31

Of the 3985 articles with the potential of being eligible for inclusion, 47 full text articles were considered for eligibility. Further review resulted in the removal of 22 articles owing to factors such as not assessing a health behavior outcome (ie, cost analysis); assessing outcomes that could not be categorized for a meta-analysis; lacking a comparison or control group, including a secondary analysis of subjects and intervention, and including data combined from RCT and quasi-experimental methods. The final pool consisted of 25 studies, which are reported elsewhere,27 and focused on both cancer and noncancer patient populations and health outcomes. The 13 studies selected for this analysis exclusively focused on cancer screening behaviors, including mammograms, pap tests, colonoscopies, fecal occult blood tests, and endoscopies.32-44

The selected studies included data collected between years 2005 and 2015. The 13 included studies had a sample size of 17,934 participants, with 8412 allocated to a PN intervention and 9522 to the usual care condition. The majority of participants were women (n = 11,588; 64.6%), whereas less than one-third of participants were male (n = 5140; 28.7%). White patients comprised 25.9% of the participant population, followed by black and Latino/a participants at 14.0% and 11.0%, respectively. Mean ages of participants ranged from 54.4 to 67.6 years, with an overall mean age of 60.9 years. Six studies (46.2%) included multisite testing, and the majority (92.3%) were conducted in the United States, with 1 in Canada (7.7%). The Table presents the demographics of included participants. Follow-up time to assess the effectiveness of PN ranged from 2 to 3 weeks to 18 months, with a mean time of 28.9 weeks, including second and third follow-up points. One study (7.7%) tested PN in an academic hospital setting, and 38.5% assessed PN in a community health setting. However, it was unclear for more than 50% of the studies whether they were in an academic or community setting as it was not explicitly stated. Finally, slightly less than half (46.2%) of the studies reported details on how navigators were trained32,35,38,40,42,43 to varying degrees of detail. 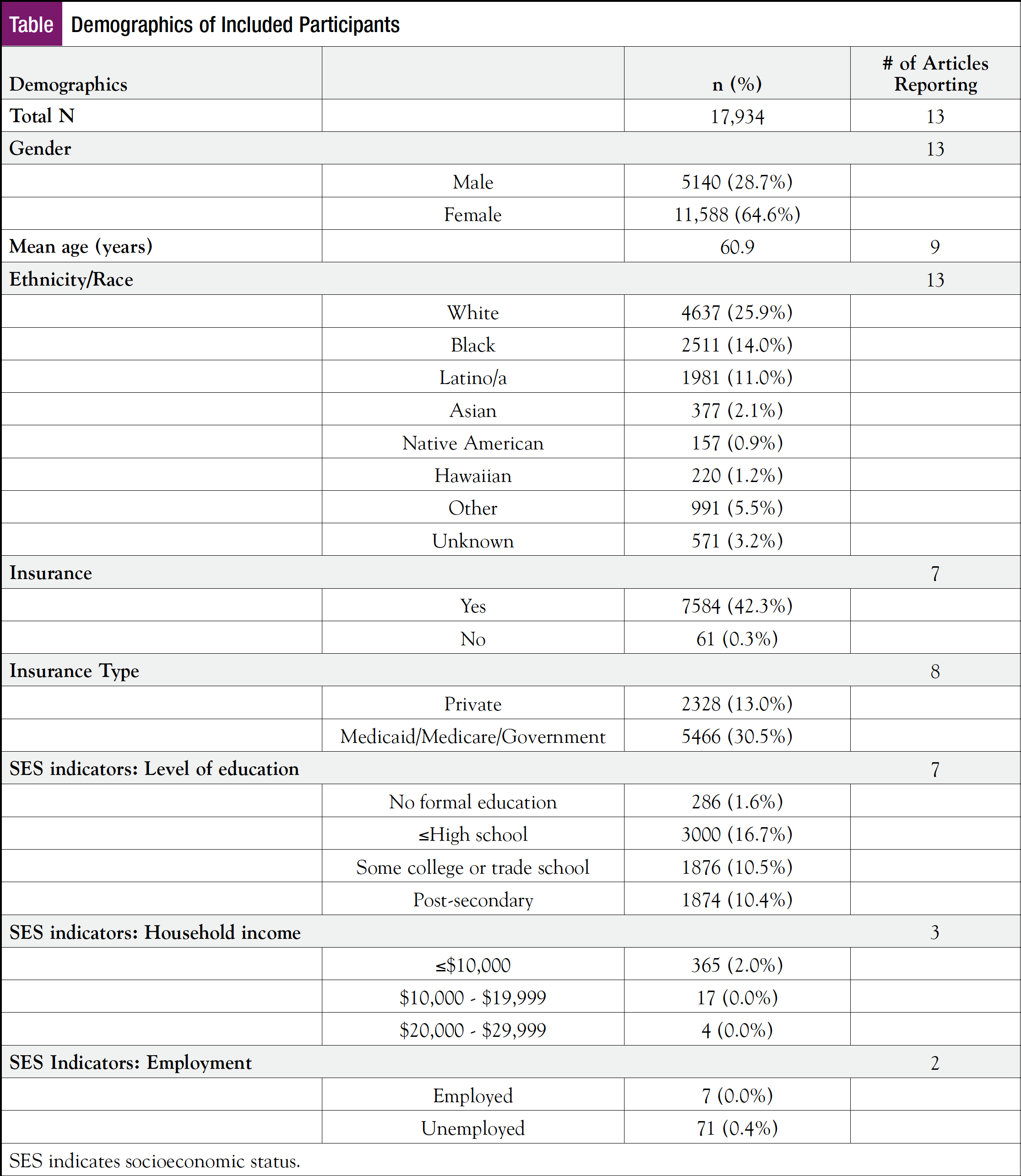 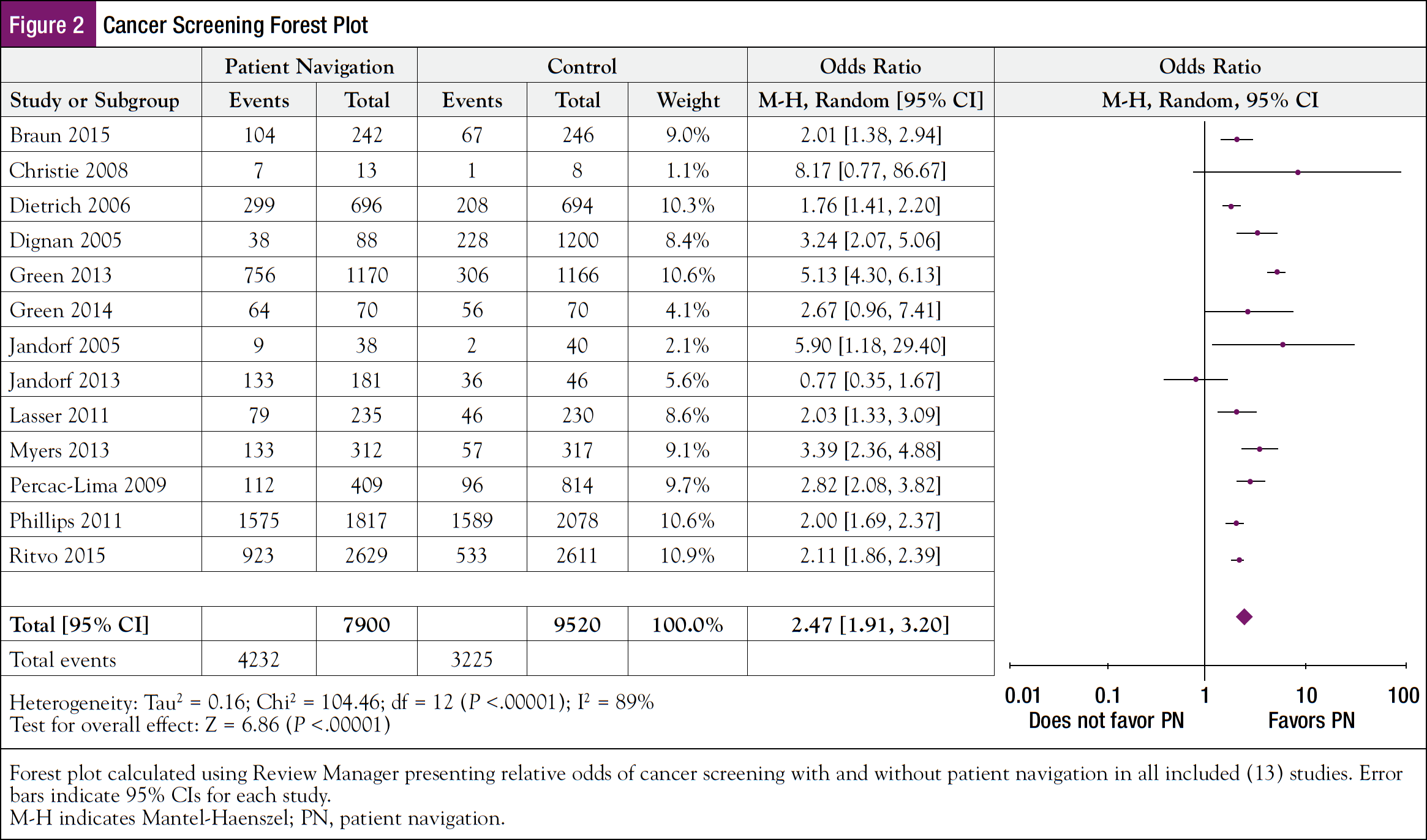 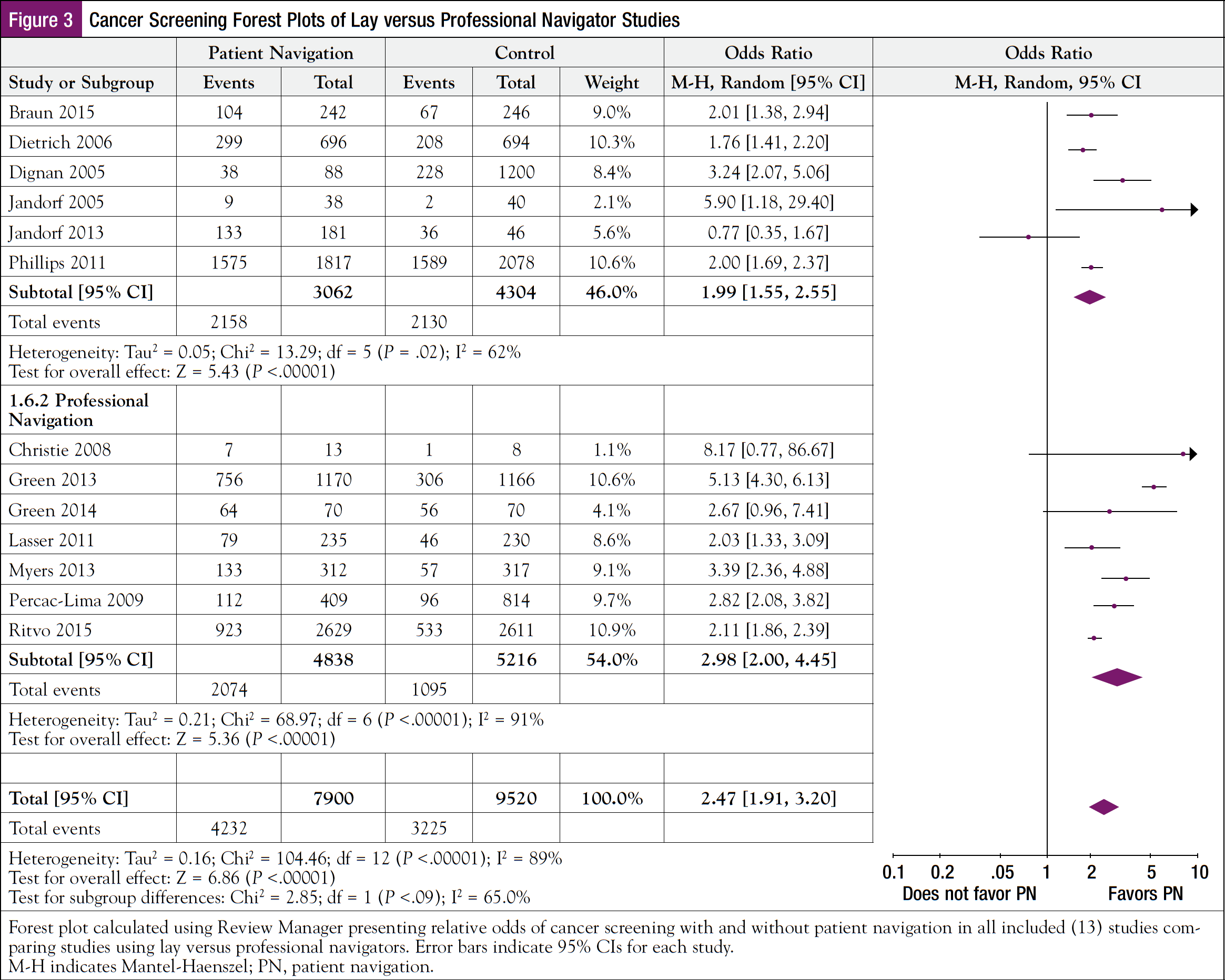 The majority of participants analyzed in the studies were women (64.6%), indicating that PN is an effective intervention for women. However, the relatively small number of men (28.7%) in these studies means that the effect of PN on screening rates among men is largely unknown, highlighting the need to further test PN with male cancer patient populations. With regard to ethnicity, one-quarter of participants in the studies were white (25.9%), while the remaining were black (14.0%), Latino/a (11.0%), Asian (2.1%), Hawaiian (1.2%), Native American (0.9%), Other (5.5%), and Unknown (3.2%), suggesting PN to be an effective intervention for increasing cancer screening among ethnic minority populations, although further investigation of this relationship is required.

The limitations of this meta-analysis warrant caution when interpreting these results. First, the degree of heterogeneity was high in this meta-analysis with an I2 value of 89%, indicating great diversity in effect sizes, thus complicating the interpretation of the results. Second, follow-up times (the point at which outcomes were assessed) varied greatly between studies with times ranging anywhere from 2 to 18 months. Third, PN interventions were tested in diverse settings (eg, community health centers, hospitals) and lacked standardization, and the modalities of PN intervention were also diverse in content and delivery. The nature of interactions between navigators and patients necessitates a certain level of flexibility due to the unique needs of each patient, yet flexibility increases the difficulty of controlling for confounding factors. However, the standardization of PN interventions and training is necessary to reduce the possibility of confounding factors. Finally, details of intervention content and navigator training were unclear, thereby making it difficult to draw conclusions regarding which components of PN were effective for increasing cancer screening.

The current literature on the effectiveness of PN for cancer screening behaviors demonstrates that PN is a successful intervention for increasing cancer screenings, with both trained lay and professional navigators, including nurses, demonstrating effectiveness. Both women and ethnic minorities benefit from PN, whereas the effects of PN for men need further examination. Yet, given that the interventions tested varied considerably, identifying successful elements of PN interventions becomes difficult. However, as research has already established a relationship between increased cancer screening and lower rates of mortality,1-4 the implementation of PN as a health behavior change intervention in the healthcare system may have positive implications for mortality rates in cancer populations. Although further research is required to understand how the various components of PN are effective, the results from the current meta-analysis support PN as an effective intervention for increasing cancer screening rates.

We would like to thank Maureen Pakosh, Information Specialist with Library & Information Services, University Health Network Toronto Rehab in Toronto, Canada, for conducting our search of the databases.

Conflict of Interest: The authors declare that they have no conflict of interest.

Ethical approval: This article does not contain any studies with human participants performed by any of the authors.

Related Articles
Tales from a Navigator: “Can You Navigate Our Horses Out of the Parking Lot?”
September 2021 Vol 12, No 9
On a daily basis, navigators are asked to provide many varied, and sometimes very novel, services for their patients, according to Penny Daugherty, RN, MS, OCN, ONN-CG, an oncology nurse navigator at the Northside Hospital Cancer Institute in Atlanta.
AONN+ Annual Conference Monograph: A Study of Key Sessions
Meg Barbor, MPH
|
May 2021 Vol 12, No 5
At the recent AONN+ Annual Conference, experts in oncology navigation convened virtually with conference attendees to offer their insights in furthering the efficacy of navigation. This monograph will review the proceedings from 4 key sessions covering the timely topics of telehealth, mental health and the oncology patient, prehabilitation and rehabilitation, and value-based oncology care.
Developing and Sustaining Patient Navigation Programs in Low- and Middle-Income Countries
April 2021 Vol 12, No 4
The American Cancer Society aims to implement navigation programs abroad through the BEACON Initiative.
Last modified: April 22, 2021 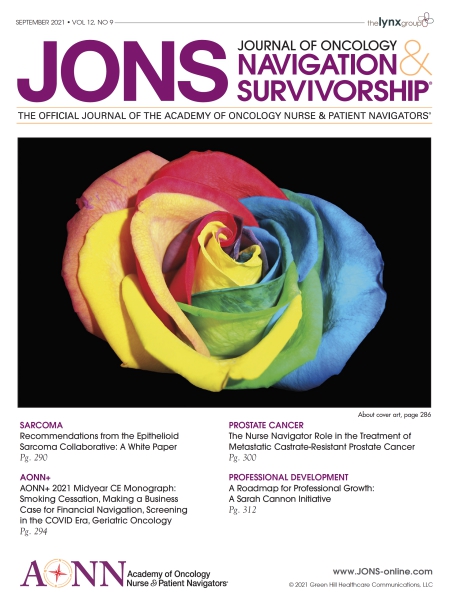