Genetics, Genomics, and You: A Primer for Oncology Navigators 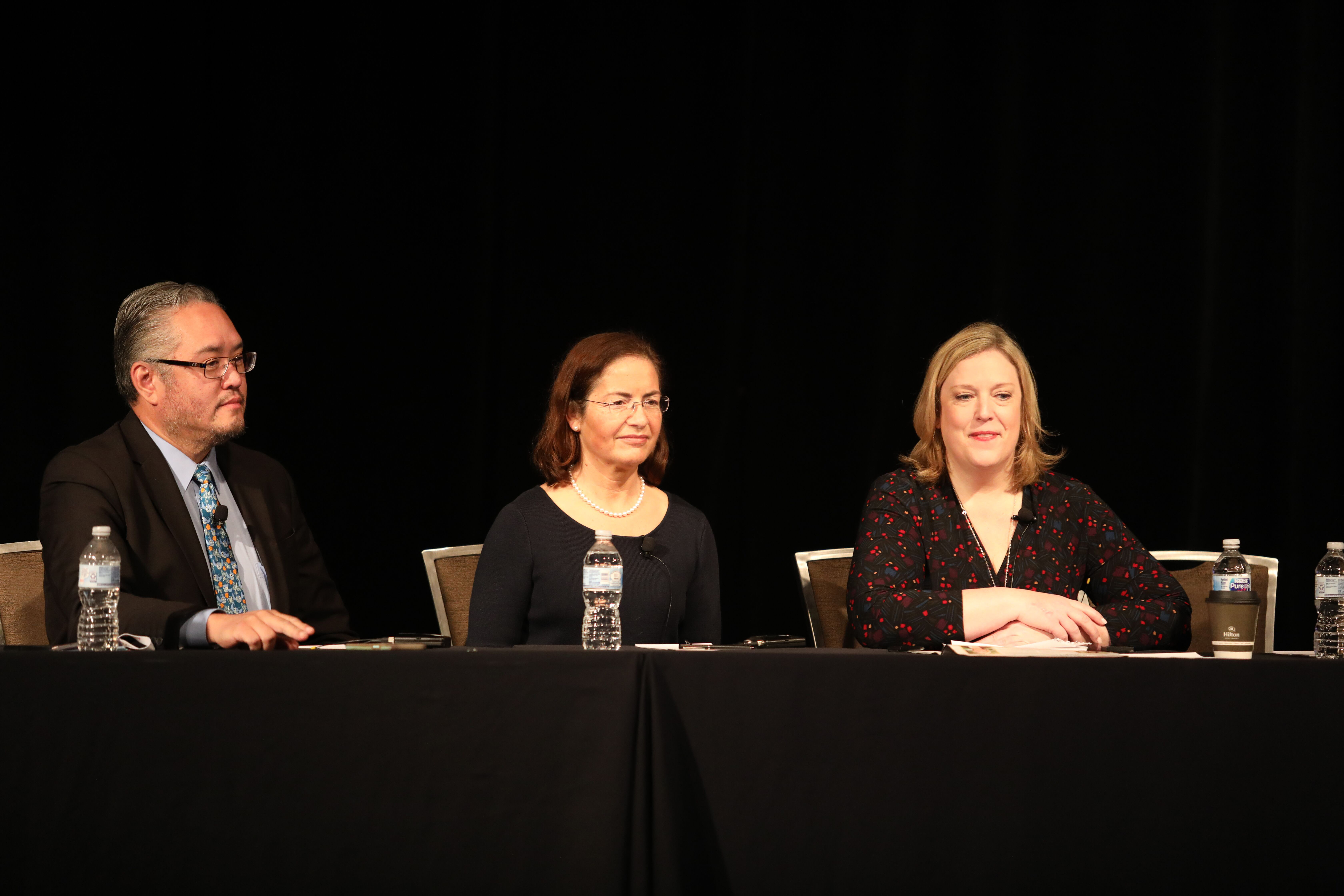 Nurses and navigators play a crucial role in teaching patients about genetics and genomics, as well as in gathering the vital information necessary to actually carry out genetic testing and allowing patients to take control of their genetic inheritance. In a session at the 2018 AONN+ Annual Conference, Theodora Ross, MD, PhD; Frank dela Rama, RN, MS, AOCNS, AGN-BC; and Jennifer Klemp, PhD, MPH, MA, primed the crowd of navigators on their burgeoning role in the field of genetics and genomics.

According to Dr Ross, a cancer geneticist at UT Southwestern Medical Center, many people are simply afraid of genetics, largely due to a lack of understanding. “In reality, it takes courage to look at your family history in detail and get the truth,” she said. She prepares patients by talking about that issue up front, stating plainly that it can be a difficult process.

Dr Klemp stressed the importance of explaining basic terminology to patients, such as the difference between a germline mutation—an inherited change in a gene that causes an increased risk for cancer—and a somatic mutation, an uninherited change in a gene that arose in the tumor and is confined to it (every cancer has many somatic mutations). Patients should also understand that genomic testing can affect their course of treatment by increasing diagnostic specificity—for example, germline tests have evolved into biomarkers for treatment choices and other types of management.

Let patients know that when it comes to genetics and genomics, we have only uncovered the tip of the iceberg. “Today we can test for 80 genes, and tomorrow we’ll be able to test for 100,” said Dr Ross. “We have 20,000 genes in our genome. It’s a process.” Dr Klemp, an associate professor of medicine at the University of Kansas Medical Center, agreed, adding that expectation management in genetics is crucial.

The Importance of Family History

Family history is key to the process, so having a genetic counselor on hand can be an invaluable tool. When it comes to collecting a patient’s family history, Dr Klemp stressed the approach of “early and often.” Start collecting information over the phone, then follow up and collect a more detailed history in person; the earlier the process is started, the more thorough the family history will be. “We’re constantly learning, which means the tests we do today may need to be updated or reevaluated 5 years from now. Genetics really is a continuous process, making that base level of knowledge so important,” she said.

According to Mr dela Rama, a clinical nurse specialist in oncology/genomics at Palo Alto Medical Foundation, the vital tools in genetics are not just lab tests but also include accurate collection of family history, physical assessment, and even facilitating patient travel to the genetic testing center. He noted that guidelines change frequently, so he advises navigators and even primary care providers to refer patients for genetic testing if they have a family history of cancer, regardless of whether they test positive for a mutation. “The other part of genetics is the negatives. So, when in doubt, send them over, and we’ll evaluate them,” he said. “We don’t want to miss anything.”

When a patient is positive for a mutation, what to do next can be a moving target, according to Dr Ross. Patients can find it hard to communicate with their families about the need for cascade testing, often because of their own lack of understanding about what it entails. Communicate to patients that they could save the lives of their family members by encouraging them to go for genetic testing, she said.

She underlined the importance of realizing how much we still don’t know, and being able to explain that to patients. For example, over one-fourth of past “disease” mutations have now been established as common polymorphisms. Additionally, rare or de novo variants in a gene already implicated in the disease used to be deemed causal. That is not the case now.

“One of the hardest things to describe to a patient is that we’re all part of this evidence-based care team, but the evidence isn’t black and white,” said Dr Klemp. “There’s a lot of gray, and gray is hard to describe. So, tee up that expectation in the beginning. It translates not just to genetics, but to pretty much anything that will happen to them in healthcare.”

“The good and the bad is that we do have guidelines, but you sometimes have to dig for them,” she added. “There’s not always an easy way to keep up with that changing target, but it’s better to overidentify than to underidentify.”

Germline mining has revolutionized cancer care in the past 20 years, and celebrities have helped bring the topic to the public forefront. Gilda Radner, a famous actress who died of ovarian cancer at the age of 42, said, “I grew up in front of a TV. I guess I’ll grow old inside one.” “At that time, we didn’t know there were such genes as BRCA1 or BRCA2,” noted Dr Ross. But more recently, actresses like Angelina Jolie and Christina Applegate chose to undergo germline testing and took prophylactic measures after learning they both possessed the BRCA genetic mutation.

Historically, genetic testing has relied largely on referral. But according to Dr Klemp, the process and follow-up should now be embedded in the clinic, as it is often difficult to know whether a patient showed up to an appointment for genetic testing. “That’s not what I like to call the ‘circle of care,’” she said. “Embedding these guidelines as standard of care means we have to respond with a process, and that means making sure that we’re seeing that circle of care versus fragmented care.”

Navigators should stay abreast of changes to testing eligibility criteria and guidelines and should not neglect genetic testing in the setting of survivorship, she said. Just a few years ago, guidelines were different than they are today, and testing for gene mutations only at the time of diagnosis will result in many patients slipping through the cracks.

In collaboration with AONN+, the National Society of Genetic Counselors, and The Jackson Laboratory, Dr Klemp and colleagues are in the process of developing an intensive course and workshop on cancer genetics and genomics. They aim to launch the program electronically as well as in an intensive workshop at the next AONN+ annual conference.

“Our job is not to make everyone a genetic counselor,” she added. “Our job is to take nongenetic experts and make them much more knowledgeable and capable in their day-to-day practice of helping patients.”

Related Articles
Preconference Workshops Allow for Additional Learning Opportunities
AONN+ 2020 Conference Highlights Special Feature
Attendees seeking to maximize the educational benefits of the conference took part in 4 preconference workshops, addressing topics including genetics and genomics, financial navigation amid the COVID-19 pandemic, professional development, and motivational interview skills for navigators.
AONN+ Awards Recognize Excellence in Navigation
AONN+ 2020 Conference Highlights Special Feature
Honoring the best in the navigation field, the AONN+ awards are presented each year in various professional categories, also recognizing a patient for outstanding contributions to the cancer community with the CONQUER: the patient voice Hero of Hope Award.
Telehealth and Oncology Navigation: Delivering Care Digitally Amid the Pandemic
AONN+ 2020 Conference Highlights Special Feature
Allowing providers to connect with and care for their patients without in-person visits, telehealth has surged during the COVID-19 pandemic. While advocates push for the expansion of telehealth and the opportunities it represents, providers and patients seek to overcome associated challenges.
Last modified: November 5, 2020